A building boom is coming along Dallas’ Turtle Creek 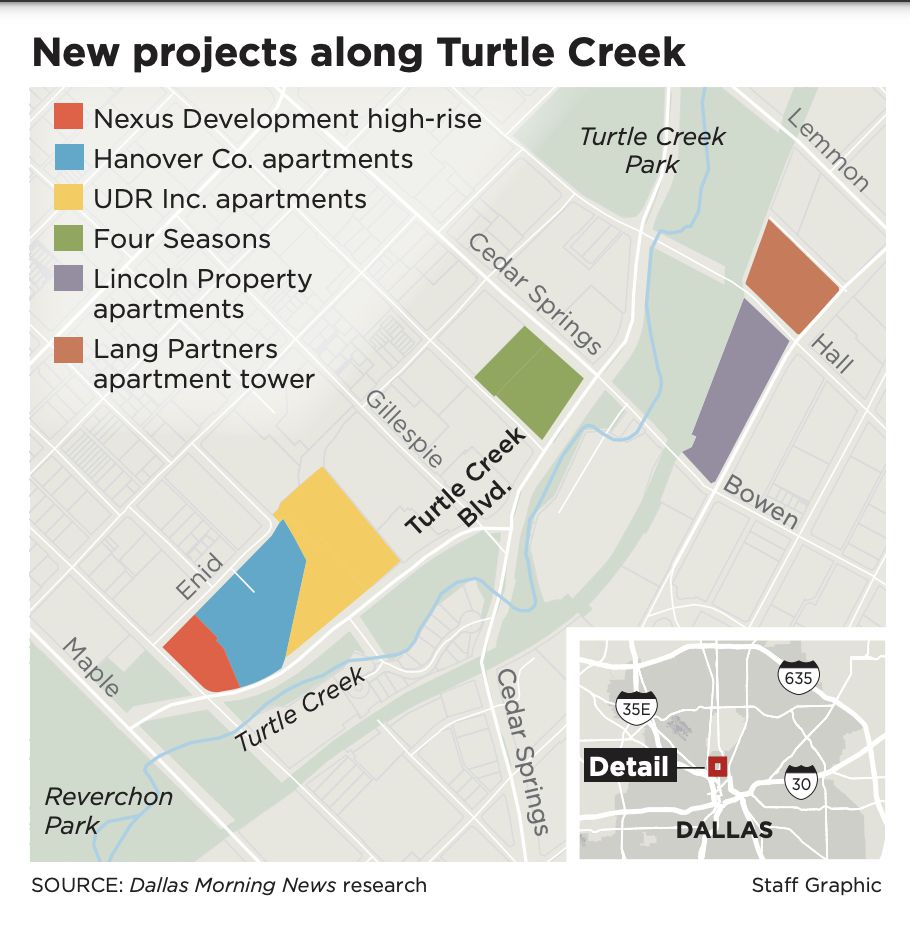 The meandering creek running north of Uptown has also caught the eye of developers. Almost $2 billion in new real estate projects are in the works along the waterway.

“You are going to see at least five cranes all coming out of the ground at the same time,” said property broker Newt Walker, who has sold sites in the area for decades. “Turtle Creek has been a sleepy stepchild for a long time, and all of a sudden, it blossomed.

“It is one of those situations where all the stars aligned,” he said.

The high-rise with a 5-star hotel and luxury residences is being built on a vacant block that Dallas’ Perot family acquired years ago.

The Perot’s Hillwood firm built its headquarters on Turtle Creek seven years ago when not much else was happening in the area. “We saw what was great real estate in a great location,” said Ross Perot Jr. “You are between the Park Cities, downtown and Uptown.

“That whole area is really coming together, and it’s great to see the redevelopment going on.”

Hillwood is providing the land for the new Four Seasons. Award-winning architectural firm Pelli Clarke Pelli is designing the tower, which will be more than 20 stories.

Perot said the Four Seasons project will focus more interest in the area.

“It’s going to be a great 10 years for Turtle Creek,” Perot said.

One of neighborhood’s existing landmarks — the 4-decade-old Mansion on Turtle Creek Hotel — just sold to a Dallas-based investment group.

“My goal is going to be to bring some real amenities in food and beverage and wellness to the Mansion,” said Vipin Nambiar, founder of HN Capital Partners. “I think those interventions start to make the neighborhood a bit more vibrant, albeit for a luxury customer.

“The Four Seasons will do the same,” he said. “I can see parcels around the two hotels becoming sought after for residential rentals or condos.”

“The proximity to Turtle Creek Park is important,” Lang Partners’ Dirik Oudt said. “It’s a beautiful park and kind of has a feeling of Central Park.”

With so many projects on the way, land costs along Turtle Creek have escalated.

“You have so many people looking at so many sites, things get ginned up,” Turner said.

“You are two minutes from Uptown, five minutes to downtown, you can step right on to the Katy Trail,” Swaldi said. “And you are right next door to our only 5-star hotel, and our newest 5-star hotel is coming to this same area.

“It’s as good as it gets in a market that is considered one the very best markets in the U.S. to build new high-quality projects.”