Ardor in the garden: How a couple of Cleveland ‘Tomato Guys’ are turning a backyard farm into an empathetic sustainable empire 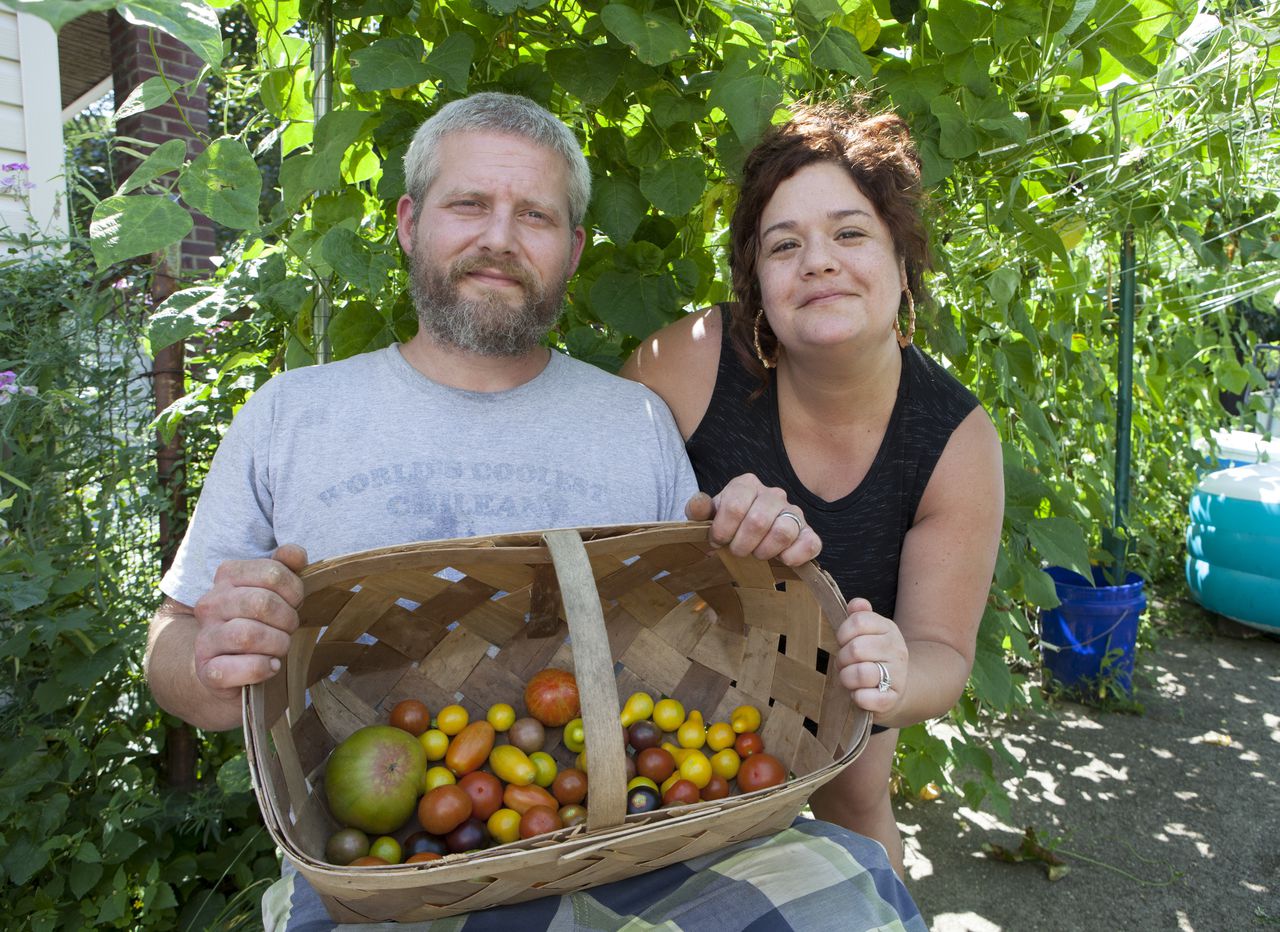 CLEVELAND, Ohio – On a quiet rambling brick-paved street in Old Brooklyn, well-worn, but still well-kept houses line the street, basking in the sun like elderly pensioners on summer holiday. From the street, there’s a relaxed similarity, lots of deep shady porches and casual beds of pink coneflowers and jewel-toned zinnias.

But in back, there tends to be a little more personality…all right, a lot more personality, especially in Rosie Galaz and Will Norris’ backyard. There’s a grassy play area for their 5-year-old son, Maximus, and a nice shady place to relax under a spreading mulberry tree out by the garage. The remaining 1/6th acre has been turned into an urban jungle of agriculture that at the height of the growing season takes on an Amazonian density.

It’s the verdant realm of The Tomato Guys LTD, the name that Rosie and Will have given their budding, but ambitious, edible enterprise.

It began with a meet-cute — and appropriately vegetable-centric — moment. They had adjoining booths at the 2013 Cleveland VegFest, a one day-only vegan celebration at Cleveland State University, and she thoughtfully came with business cards.

What began as commerce soon blossomed into romance. They married the following year, and in 2018 bought the house that ultimately became Tomato Guys Central. In their small, 25-by-30-foot backyard farm, they now harvest about 1100 lb. of organically-raised tomatoes a year, in 29 varieties, plus a few surprise hybrids that always seem to emerge every year.

Norris and Galaz plant with seeds harvested from the previous crop, concentrating on heirloom varieties like Mr. Stripey, Pineapple, and Striped Romas, with a relatively new Ananas Noir, or Black Pineapple, that combines, red, yellow, green, and deep maroon to produce a one-pound tomato with all the color drama of a well-packed firework. They also grows an almost pitch black cherry tomato with a dramatic colorful “star” that’s revealed when it’s picked off the vine.

The couple plants densely in extra-rich soil, using complex webs of string to keep the plants aloft, and then, to provide a little more depth to this too-much-seems-just–about-right gardening methodology, adds basil and carrots at the base of the tomato plants, taking up those few inches of air with more green things eager to outperform each other.

Did I mention that there’s also cucumbers and green beans flourishing overhead on aerial string webbing, and herbs and flowers growing in whatever empty space remains?

A lot of this produce ends up at their Tomato Guys stand at Coit Road and Kamm’s Corners Farmers Markets (Saturday and Sunday, respectively), where they also sell infused oils and salts, Amish grains, mushrooms sourced from a friend’s Pennsylvania farm, and foraged wild berries, and some excellent garlic-spiked sundried tomatoes.

They also use the backyard crops for their catering business, Galaz calls it “farm to fork”, that began as a volunteer effort last year to help feed essential workers, using the produce that otherwise would have gone to waste for lack of open markets.

It turned out that they had a knack for it — no surprise as they are both graduates of the Pennsylvania Culinary Institute, and have spent years working in the food industry. They now offer event catering and box lunches with fresh-from-the-backyard garden ingredients for businesses and other groups from a commercial kitchen in a senior center in Lakewood.

But the real goal for this couple is to spread the experience of urban gardening and eating what you grow.

Galaz is from Santiago, Chile, where her family had orchards of figs, lemons and avocadoes. Norris is from Pickerington, Ohio, just southeast of Columbus where he was schooled in more traditional growing techniques at his grandparents’ multi-acre garden.

There are a lot of other greening initiatives out there, but they want to make it hyper-personal and meaningful, offering classes and experiences with multiple opportunities to learn to produce first-class produce, and prepare it with integrity. As Galaz says, “I believe that organic should be accessible to everyone, as a right, not a privilege.”

Together they’re working to prove that with a little love — and some hard work — fresh healthy food can flourish almost anywhere it’s planted–and can be grown, enjoyed, and appreciated by those that need it most.

This all-purpose topping, full of the best flavors of the season, comes together quickly and makes a lot! Use it for bruschetta, savory tarts, canapés, and even your breakfast toast!

Zest from one lemon (optional)

Mix the tomatoes, onion, pepper, and celery together in a big bowl. Put the rest of the ingredients in a medium bowl, or large jar with a lid, and whisk or shake to combine well. Add to the bowl of vegetables, stir to combine and keep in mason jars, or well-sealed containers in the refrigerator to keep fresh.

Another delicious way to enjoy the bounty of the season, these stuffed tomatoes are the perfect centerpiece for a late summer dinner. Just add a green salad, hopefully with ingredients from your own garden, and maybe a fresh sourdough bread to soak up all the juices, and enjoy!

1/2 teaspoon salt, or to taste

Cut tomatoes in half lengthwise, scoop out most of the pulp and put in a medium bowl. Beat one egg and add to the pulp, along with cheese, onion, butter, garlic, salt, pepper, and optional cayenne pepper. Fill the tomatoes half-full with the pulp mix and bake for about 4 minutes, or until the cheese melts. Beat the remaining egg in a large bowl, add the spinach, kale, and breadcrumbs, mix well. Top the tomatoes with the spinach kale mixture, pack lightly with spoon to make sure the tomatoes are well-filled. Top with remaining cheese, if desired. Turn oven to broil, and when it’s heated, add the filled tomatoes and broil briefly, watching carefully, until they are lightly browned and slightly crisp on top. Remove from oven, let cool for several minutes and serve. Delicious!

There comes a time every year when you look at all the fresh juicy richly-flavored summer tomatoes in your garden, farmer’s market, or grocery store, and wish you could capture that sweet sunny taste for when you really need it, let’s say somewhere in deep dark mid-February. This recipe is for that time. So gather those tomatoes while you can, clear some space in your freezer and get to work. This makes a lot of soup and that’s a really good thing. And PS, it’s really pretty easy, this recipe lets your oven and food processor do most of the heavy lifting.

Summer tomatoes, about 20-30, depending on the size., but as many as you can squeeze into a large turkey roasting pan in a single layer

salt and pepper to taste

Preheat oven to 450 degrees. Core tomatoes, being sure to remove the entire white core. Pack the tomatoes in a single layer in the roasting pan in a single layer, cored side up. Mix the broth, soy sauce, syrup, olive oil, and red pepper flakes and pour into the tomato cavities. Any extra liquid can be poured into pan . Sprinkle garlic and onions over the tomatoes and put in oven uncovered. Roast for about an hour, until the tomatoes become very soft and slightly blackened. Remove from oven and let cool completely. Batch-process in a food processor or blender until the soup is smooth and creamy. Taste and adjust seasonings, and then put in freezer containers or zip-lock bags, and hopefully store right next to your homemade frozen pesto. Nothing is better on your own tomato soup than a spoonful of your own pesto. And now, relax. You’re totally prepared for at least four or five mini-trips back to summertime and tomato nirvana.