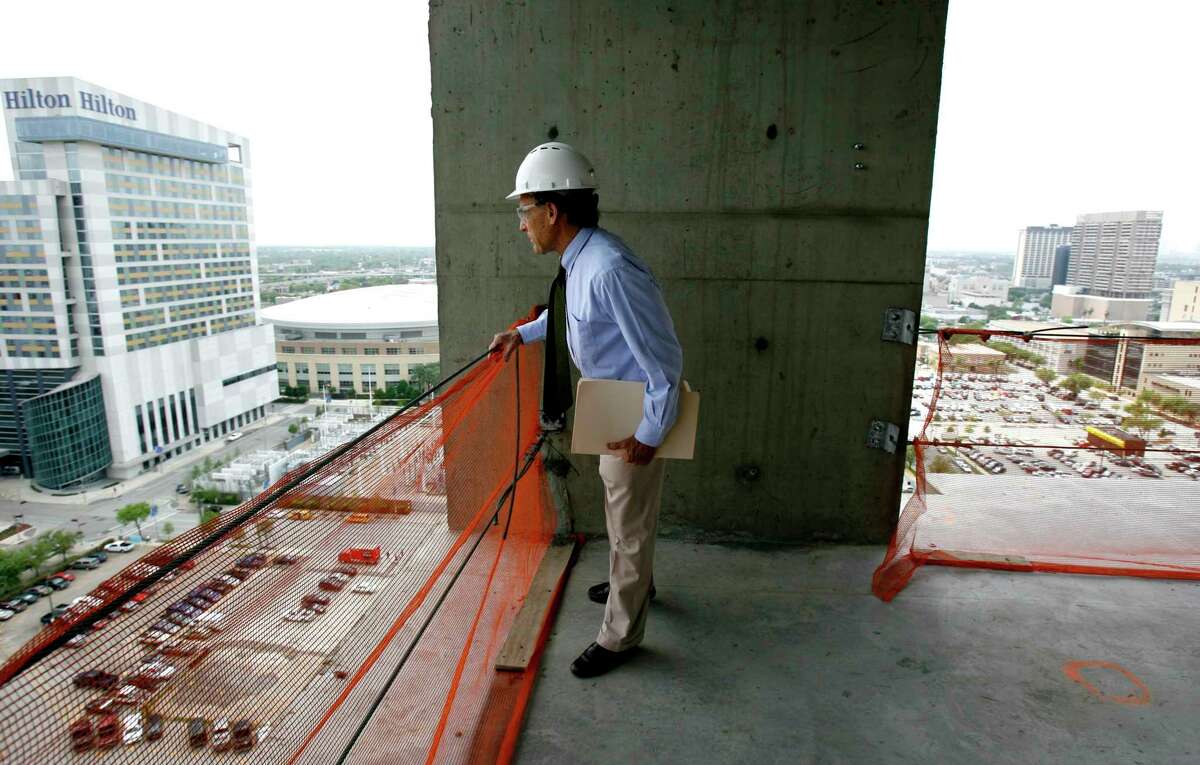 Marvy A. Finger, the prominent real estate developer who helped to transform Houston’s skyline with forward-thinking apartment projects, died Saturday at the age of 86.

Over the course of his 64-year career, Finger helped to foment the advent of apartment living in downtown Houston as he built an empire of more than 28,000 residential units in Texas, California, Colorado, Georgia and Illinois. Finger, the CEO of Finger Cos., was a mentor to many in the apartment industry in Houston, creating a legacy that extended beyond the boundaries of his own firm.

Known for his exacting standards but down-to-earth demeanor, Finger had a reputation for spotting the best locations for apartments and an instinct for overseeing well-thought-out designs.

“Marvy expected perfection in himself and those he worked with,” said Stan Creech, a friend and land broker who represented Finger on several land deals over the decades. “He was a forward-looking visionary who changed the landscape of the multifamily development industry.”

Born in Houston on December 18, 1935, Finger had long assumed he would follow in his father’s footsteps in the furniture industry. But after graduating with a degree in civil engineering and a minor business administration from the University of Texas at Austin in 1957, he got a job working for a small homebuilder. When the builder fell ill unexpectedly, Finger was asked to complete a 32-unit apartment complex, Finger previously said in earlier media interviews.

Finger, who knew nothing about building apartments at the time, took on the task with the exuberance of a 20-something, running a project that would help lay the groundwork for his career in residential development. A mortgage banker who financed one of his early projects, the late Ben G. McGuire  –  an influential figure in the industry at the time – took a liking to Finger.

“Because I finished this little apartment, he took me under his wing and said, ‘Let me be your mentor. Let me show you how to build your own development,’” Finger recalled in an interview earlier this year. “That was really my being at the right place at the right time.”

RELATED: How Marvy Finger’s 63-year business strategy paid off in a $2 billion deal

Soon Finger would launch his own company, collecting a 3 percent fee for his first apartment complex. At the time that fee was just $3,500 a month, but it was enough to live off of, so he never considered selling.

Finger went on to patiently amass a portfolio of properties located at what he called “Main and Main” spots – or the most popular, bustling sites, including many in downtown Houston. He had a long-term strategy of holding high-quality sites rather than searching for quick cash or profits. In some years, he wouldn’t acquire any new properties if they didn’t meet his standards.

While architecture and planning were key to a successful multifamily project, Finger credited his properties’ locations for helping his portfolio weather economic crises, including the 1980s oil bust in Houston and the Great Recession.

“I call it Main and Main locations. When we had the deepest, darkest parts in occupancy drops, the few apartments I had in the inner city, occupancy remained. In the great locations, rent moderated, but there was the occupancy,” Finger said at a multifamily conference in 2018.

Finger’s notable Houston projects included 500 Crawford in downtown, 9900 on Memorial in west Houston, the Susanne in Montrose and 1900 Yorktown in Uptown. But one of his more influential projects was One Park Place, the luxury high-rise across from the popular Discovery Green, which helped spark further residential development in downtown Houston. The project also brought downtown its first big grocery store in decades, Phoenicia Specialty Foods.

“He proved up the downtown market when he built One Park Place,” said Mike Morgan, chairman of the apartment development firm Morgan Group.

Morgan said that caught the attention of the city of Houston, which launched an initiative of incentives to entice more residential projects in central business district. “After One Park Place, there was a flood of all those units around the ballpark (Minute Maid Park).”

Finger was a mentor to Morgan for many years, often providing Morgan with honest feedback about Morgan Group’s projects and deals. Later his mentorship would extend to Morgan’s sons Russ and Phil (the latter is now CEO of Morgan Group).

“We’d go to lunch the original Irma’s near Minute Maid Park, which was one his favorites, and he would spend as much as the boys wanted, he was never in a hurry and we’d just talk real estate,” Morgan recalled. “He was always kind and gracious to me as my kids… (but) he was very tough. He knew what he wanted. Everybody respected him and looked up to him for what he accomplished.”

Finger was known for using the highest quality materials, added Stan Creech, the land broker who worked with Finger. Known as the “king of apartments,” Finger would regularly stop by various properties unannounced to make sure the sites were impeccably managed, Creech added.

Those high standards attracted the eyes of investors, and last year as apartment values soared in the wake of the pandemic, Finger finally decided to sell much of his portfolio. Greystar Real Estate Partners, of Charleston, S.C., bought 20 of his properties for $2 billion in late 2021.

As part of the transaction, Finger insisted Greystar hire much of the properties’ maintenance staff, some of whom were on his payroll for 25 years. Finger Cos. still owned 14 properties in Houston, Los Angeles and Chicago as of early 2022.

Despite his success and wealth, Finger remained modest, wearing penny loafers and driving a 10-year old BMW sedan while living in a three-bedroom home with wife Elaine and their cat, Esther. Even into his 80s, he woke up at 5:30 a.m. every day to hit the gym before heading to the office.

Finger and his wife Elaine launched a foundation in 2013 to provide scholarships for low-income and minority recipients to learn trades. The foundation also provided food to the Houston Food Bank.

Besides his wife, Finger is survived by his two children, Jill Jewett and Edward Finger, along with his grandson, Greg Newton. He also leaves three grandchildren, two step grandchildren and one great grandson.

Jewett will assume leadership of the Finger Cos.

“For more than 60 years, the Finger Cos. has had an unwavering approach to developing and managing the highest quality multifamily projects,” said Jill Jewett.  “My brother Edward and I have been working alongside our father as his business partners and officers of the company for many years. Edward and I, along with our executive management team, are committed to ensuring that business continues as usual, for the ongoing success of each property.”

A memorial service be held at 5:30 to 7:30 p.m. on October 25 at Geo H. Lewis & Sons located 1010 Bering Drive. There will also be a remembrance  held at 11:30 a.m. on Wednesday October 26 at the Congregation Beth Israel at 5600 North Braeswood Boulevard. (Those unable to join will be able to view a livestream of the service by visiting his tribute page GeoHLewis.com.)