Sorina Vaziri is improving the parks in L.A.’s Mid-City 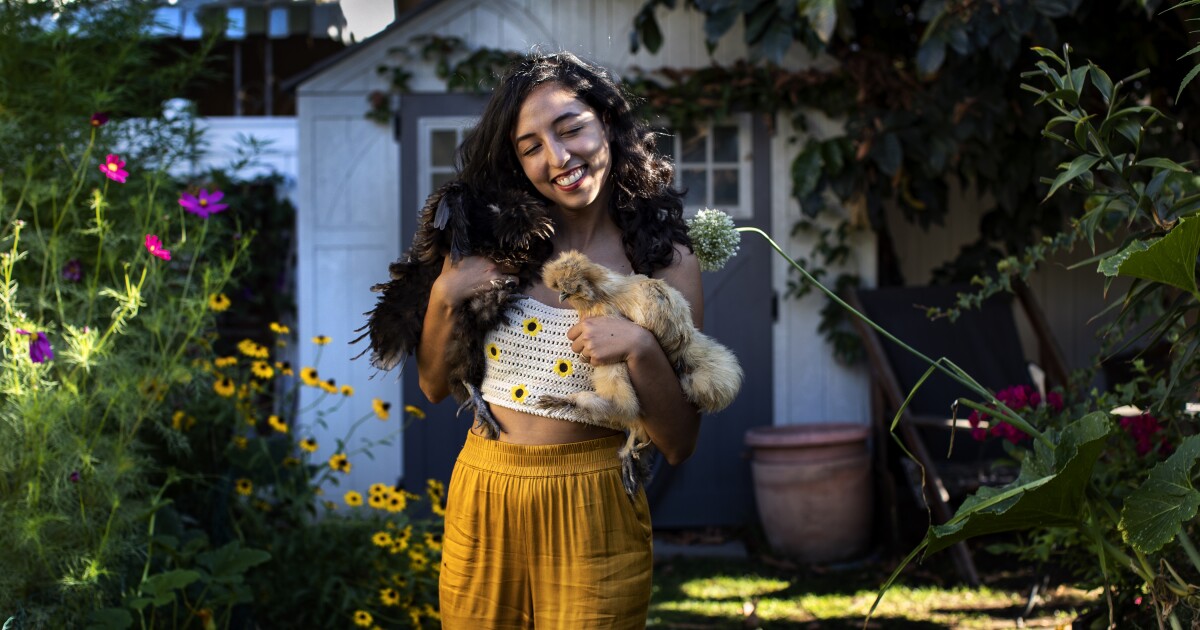 This is the latest in a series we call Plant PPL, where we interview people of color in the plant world. If you have any suggestions for PPL to include in our series, tag us on Instagram @latimesplants.

As a child, Sorina Vaziri spent summers at her grandparents’ home in Iran, where she and her many cousins would explore the garden’s lush, vast food forest, which overflowed with an abundance of juicy pink pomegranates, sprawling grapevines and thousands of persimmons. Beneath the cooling shade of fruit trees, the cousins would play backyard games like manhunt — an action-packed combination of hide-and-seek and tag — before retreating to the house for a refreshing glass of traditional Persian tea.

“Growing up as a kid there was really, really magical,” Vaziri recalled. “We would eat our lunch, and my grandma would make these sharbats, which are like cold iced teas. We would all go under the walnut tree and drink them.”

As it has been for hundreds of generations of Persian families, the garden served as a central meeting ground for Vaziri and her family to socialize, grow produce and enjoy traditional teas, often revitalizing blends of sweetener, herbs, floral essences and acid bursting with natural flavors like rose water, orange blossom water and basil.

They were said to be so relaxing that kings would even work their own gardens.

Inspired by these fruit-filled gardens of her youth, Vaziri set out on a mission to open the first public traditional Persian tea garden in the United States in her Mid-City backyard.

“L.A. needs a Persian paradise garden,” Vaziri said. “We have a huge population of exiled Iranian Americans, and to create a garden that feels like home would mean the world to this community. Our culture is so much deeper than the ‘Shahs of Sunset’ — we’re known for our hospitality, food, poetry and art — but with sanctions placed on travel, it’s really difficult for foreigners to ever experience.”

Visitors can book personal time, private tea parties and romantic evenings in Teapot’s extensive vegetable, flower and herb gardens on Healing Gardens for as little as $20 for two hours. Tea is always on the house, and all bookings benefit Mid-City is Growing, a grass-roots campaign spearheaded by Vaziri and Teapot committed to improving and increasing the number of public parks and inspiring green spaces available to Mid-City children.

Without a doubt, treasured childhood memories are the root of Vaziri’s love of gardening. However, the Miami native’s first garden — which she planted when she moved to L.A. five years ago — was created out of necessity more than anything else. In Santa Monica’s Ocean Park neighborhood, the only store selling produce was far out of Vaziri’s price range.

“I’m the kind of person that will always do it myself if I can’t buy it,” the 30-year-old said. “I started with a 2-by-6-foot raised bed, watching YouTube videos and reading books. My obsession grew. … I just kept expanding the perimeters of my garden.”

By the time she moved into her current home in Mid-City, Vaziri had become well-integrated into the gardening community. A freelance graphic designer and oil painter, she wanted to bring a designer’s touch to the desolate plot of land surrounding her new 800-square-foot home. She began crafting her dream edible garden 18 months ago.

Throughout that process, she was reminded of her grandparents’ tea garden and realized she wanted to bring its serenity and culture to Los Angeles.

In December 2019, she came up with the idea of hosting a pop-up tea party in her growing backyard garden to share the beauty of traditional Persian tea garden culture with her friends. The January event, hosted by Vaziri and her cousin, attracted 80 friends and neighbors.

“Everyone was sitting down on the ground on rugs Persian-style,” Vaziri recalled. “We had teas, we had sponsors, and everyone just had the best time ever. That was the birth of Teapot.”

But just as Vaziri began planting the seeds that would blossom into a successful business, the COVID-19 pandemic hit, and she was faced with unanticipated financial challenges.

“The reality set in that finding a plot of land in Los Angeles that someone was willing to rent for pretty much no money is impossible,” she said.

On top of this, she struggled to come across sufficient tax incentives or grants to start and sustain her business.

“I was like, ‘How am I gonna get land; I’m not ready to give up,’ ” she recalled. “I realized the nonprofit way might be the best way of getting started. … So in July, we formed a nonprofit.”

After acquiring nonprofit status, Vaziri and Teapot took the lead on Mid-City is Growing. The grassroots campaign, also sponsored by the Mid-City council and L.A.-based nonprofit Nature for All, exists to create public parks and green spaces for families and children living in the Mid-City neighborhood.

“It started with the community recognizing that Mid-City does not have green spaces,” Vaziri said. “Mid-City has been severely disadvantaged. … it’s a historically redlined neighborhood. I’m super passionate about parks; I grew up at the parks in Miami. All my memories as a child stem back to planting seeds, plants and trees. I can only imagine what it’s like for these kids that don’t have access to the kind of imagination that nature can foster.”

The primary focus of Mid-City is Growing’s efforts is on Alta Loma Elementary School in Mid-City, where it is working to convert a barren 2-acre concrete blacktop into an exciting community park for inner-city families.

“The kids at Alta Loma Elementary are suffering a lot of health issues because they don’t have access to outdoor spaces to play in,” Vaziri explained. “[We have] an important petition asking people to support the community park in Alta Loma so kids can play and exercise this summer.”

As Teapot and Mid-City is Growing work toward transforming Alta Loma’s blacktop, community-led design and input from the kids and families who will be using the park are of the utmost importance.

With that at the center of her work, Vaziri, along with community organizer Montserrat Plasencia, developed Nature Camp, a nature-centered day-trip program for Mid-City children.

“Nature Camp is an experimental design workshop where kids can go to parks and gardens all around the city, experience interesting design and then be inspired to inform their own park,” she explained. “If we just put them in a room and were like, ‘Hey, would you like a soccer field or a track,’ they’re not gonna know what the possibilities are.”

In the coming months, Teapot hopes to send the Nature Camp kids on field trips to the Huntington Gardens in San Marino and the Butterfly Pavilion at the Natural History Museum of Los Angeles County.

“[We’re] taking families out on these experiences, just getting them out of the city only 30 minutes away to these places they’ve never heard of or seen because there are entry costs,” Vaziri said. “It’s a really beautiful experience for a community that we’d like to realize how valuable it is to have trees and shade and spaces for kids to play.”

She has even hosted tea parties for kids in the community in order to get further input on the Alta Loma park’s design.

“Last week, we had a tea party with a group called the Future Fighters,” she said. “It’s this group of 8-to-9-year-olds. … They were saying ‘We don’t want a plastic playground. What if we had trees with ropes in them?’”

The revenue from bookings, sales and events at Vaziri’s Teapot garden provides funds for Mid-City is Growing, the Alta Loma community park and Nature Camp excursions.

“Like I told the Future Fighters, all revolutions begin with a tea party,” she said.

On top of these signature tea parties, cultural movie screenings and organic harvest dinners, visitors can also support the Mid-City greenspace revolution by purchasing from the extensive selection of produce grown at Teapot.

Veggie lovers can purchase a variety of garden-fresh items — including specialty giant zucchini — from the L.A.-based produce-sharing website Go Galora, or they can pick their own in the garden, which has recently become home to a family of kittens along with Vaziri’s beloved flock of flightless, ultra-fluffy Silkie chickens.

“I’ve noticed that the two things people have been really inclined to have been the tea and the chickens,” Vaziri observed.

Although she admits the chickens were an impulsive, early-pandemic purchase, like many Teapot visitors, she quickly fell in love.

At the end of the day, while she admits that the relationship between Teapot, Mid-City is Growing and Alta Loma Elementary might seem confusing or time-consuming to many, Vaziri is incredibly proud of all she has accomplished.

“It’s only been 18 months since I’ve been doing this garden, and it’s skyrocketed. The ecosystem you can create, the animals you can attract … you see how quickly nature can heal itself,” she said of the once sun-dried, barren plot of land. “So much shade has been built; when we first moved here, you couldn’t even look out into the garden.”

Vaziri said her main goal with Teapot is to inspire others through sharing her garden and culture.

“Persian gardens are paradise gardens,” she said, referencing an age-old nickname. “Drinking tea and having a good time is how we share paradise. With Mid-City is Growing, I am creating a paradise at Alta Loma as well.”