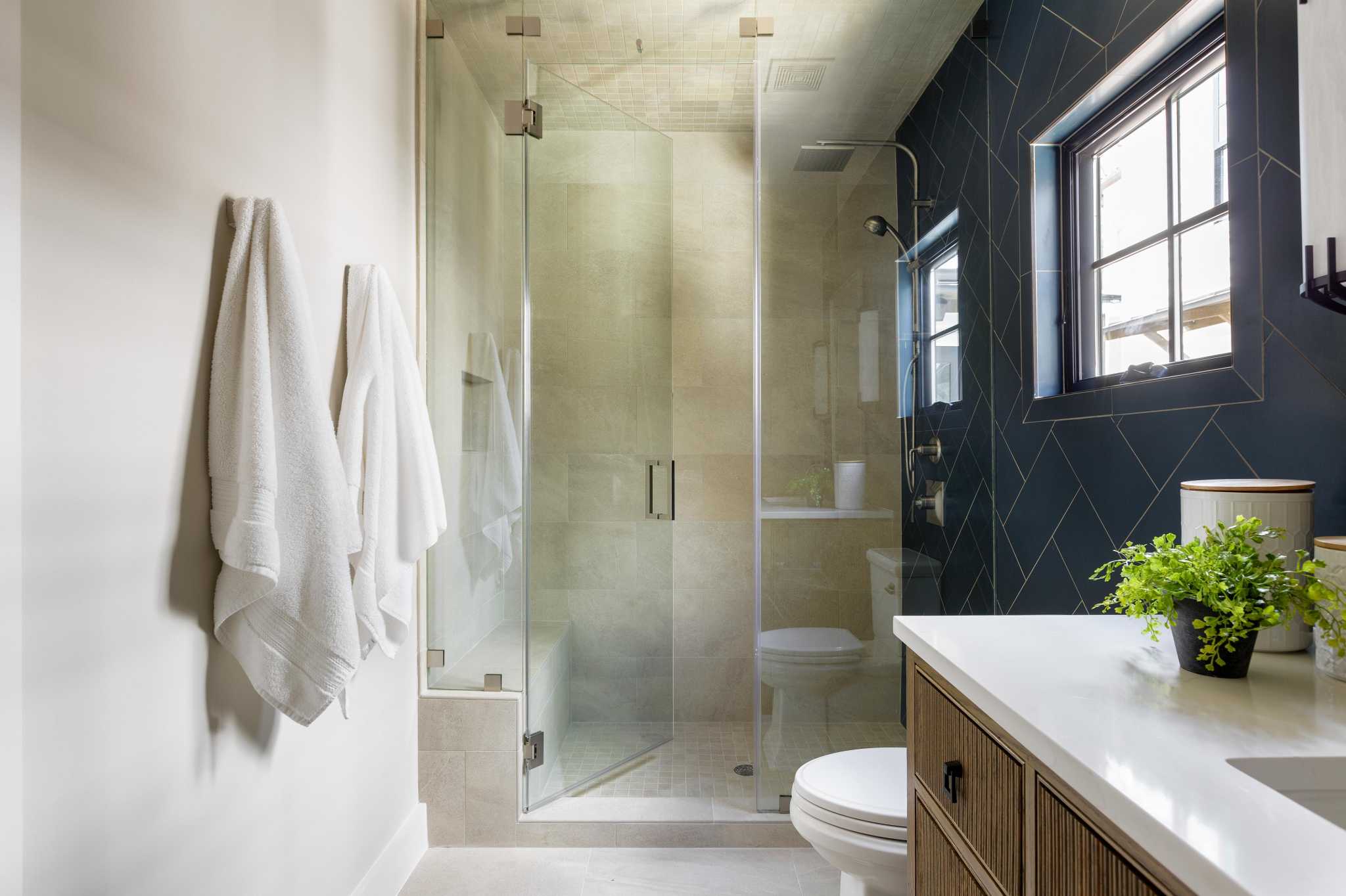 When Cathy Conrad looks around her tidy, 1,550-square-foot Montrose bungalow, she sees memories of her childhood.

Outdoors, she remembers a big, messy sycamore tree, and indoors she now marvels at how a family of five — her parents, Cathy and her two brothers — lived in this home with three bedrooms and one bathroom.

Indoors, she remembers her mother, Rolande Leguillon — a longtime French and French literature professor at the University of St. Thomas — typing her Ph.D. dissertation on a front porch that at some point was enclosed and is now Conrad’s foyer.

Someone from Conrad’s family has lived in the home for about 60 years, first she with her parents and two brothers, then joined by their grandparents, who lived in a trailer in the driveway. The family moved to Houston from Cincinnati when she was 5, and a few years later they moved into this house, which they rented for a while before purchasing it.

The home is in the Hyde Park area of Montrose, a neighborhood founded in 1893 on land that once was the summer farm of Mirabeau Lamar, the second president of the Republic of Texas.

Conrad’s home is listed in the Harris County Appraisal District as being built in 1940, but she thinks it dates back to the 1920s.

Before the home returned to her possession, her brother lived here for a number of years. After he died in May 2017, Cathy and her son, Ben Conrad, spent a summer cleaning it out, then Conrad and her contractor spent 2018 waiting out the aftermath of Hurricane Harvey and planning a full-scale remodel of the home and its garage apartment.

By the end of 2019, Conrad moved into the dramatically updated home. Not only is everything inside new — it was taken down to the studs — but it also has newly installed central air and foundation repair that included leveling and adding piers.

Neighbors made cash offers for the property, but Conrad saw it as an opportunity to move from suburban Spring back into Houston’s center at a price she can afford.

“I knew if I sold it I would never be able to get back in the market and live here. Everything is so expensive,” said Conrad, who is 70 and a retired Klein ISD teacher. “You can walk to so many things here. This is one story and very manageable.”

A pass-through from the master bathroom to the laundry area makes hauling dirty clothes easier, and drawers throughout the kitchen make getting things from the lower cabinets easier. Having everything on a single surface — even the shower — means no curbs or steps to trip anyone up.

The plan was to update and clean up both inside and outside. A new paved drive and turnaround spot make the side of the house look better and provide easier access to a busy street.

Alterations to the facade included changing the location of the door, to a side-facing entrance. Before, you entered into the living room without a buffer for noise from the street. Penberthy and Grumbles added a wall to create a foyer.

The living room is still the size it originally was, but its fireplace has been refreshed.

Pocket doors were added to a doorway casing between the living room and dining room, so Conrad can close it off if she likes. A second wall that separated the dining room from the kitchen was removed to make the space more open.

Changes in the kitchen created a peninsula with an elevated back counter, plenty of counter space and cabinets on opposite walls, plus a small island for prep work. Grumbles recommended sturdy quartzite counters with a honed and leathered finish, light neutral tile for the backsplash and a light taupe/gray paint finish for the cabinets.

The small home never had a separate laundry room, but the remodeling project moved it from one side of the kitchen to the other. Now, a washer and dryer are hidden behind lower cabinet doors that open and tuck into the sides so she can do laundry without the doors getting in the way.

Behind the kitchen is an enclosed TV room that Conrad added during the remodeling project. It’s a quiet little nook to retreat to, with a view of the small but pretty backyard. It comes in handy when Ben and his 12-year-old triplets visit.

Conrad works part time for her son at his Bearcat Pest Control business. She started helping him with his books 11 years ago in a job she thought would be temporary, but she’s still at it.

Her other children, Mike Conrad and Carolyn Conrad, live in Florida and California, respectively.

The guest bedroom is also used by her grandkids, and its guest bath has had a dramatic makeover. Space from a closet was absorbed into the bathroom to make it larger, and decades-old penny floor tile and pink squares of wall tile were replaced by porcelain tile on the floor and gray subway tile on the walls and in the tub/shower surround.

A custom-made cabinet with a sink is a handsome alternative to a traditional bathroom counter, and a round mirror and vintage-style sconces match the historical feel of this older home.

A hallway that once led to the side/back exit was absorbed into the primary bedroom suite, as was space from where the washer/dryer and pantry used to be. So now this back-of-the-house bedroom has a larger closet and a larger bathroom, too.

Grumbles chose navy-blue tile for the room’s back wall, having it installed herringbone-style and extending into the shower. The floor and shower were finished off with neutral porcelain tile.

Another custom cabinet for the sink takes the room up a notch, as do contemporary sconces that flank a rectangular mirror.

Conrad had done some shopping for finishing materials before Grumbles came on board, and found herself overwhelmed.

“Without Lauren, the house wouldn’t look like this,” Conrad said. “She took me to granite and tile and flooring places. I would say, “I like this and that, but how will it blend together? You’re in this candy store, and there’s so much to choose from.”

“She took what I wanted and guided me in the right direction,” she continued. “I would say, ‘I like round doorways,’ and she would say that it doesn’t go with the style of the house. She would rein me in.”